Incorporated in 1981, the Rhode Island Aquatic Hall of Fame recognizes those Rhode Islanders who have exhibited extraordinary service and achievement through aquatics. The Hall of Fame is in the lobby of the Tootell Swimming Center at the University of Rhode Island. It includes a large plaque with the appropriate inscription, name plates, pictures of inducted members, and a brief summary of their accomplishments.

Since 1981, Two Hundred Thirty-Three individuals have been inducted. The next induction ceremony is planned for Saturday, May 6, 2023 at the Quonset O Club in North Kingstown, Rhode Island. 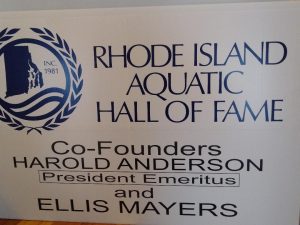